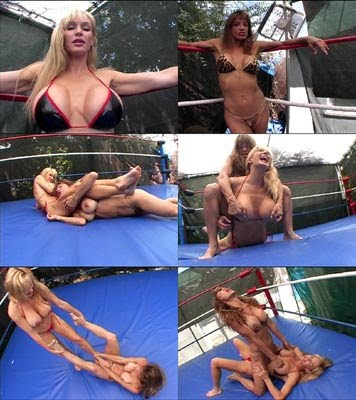 The story behind the fight as told by Tanya Danielle: "This past Friday Goldie Blair and I were shooting a custom video. During a short break I went to go stretch my muscles in a corner of the boxing ring where were filming. All of a sudden I heard a familiar voice: 'Oh, look, it's Tanya Danielle.' the woman called out in a harsh, taunting tone. 'Where have you been hiding your pathetic self?' Slowly I turned to look over my shoulder and see who would dare address me in such a disrespectful manner. I found myself gazing into the malevolent brown eyes of one Christine Dupree. She was leaning casually against the ring-post in the opposite corner. 'What are you doing here?' I inquired with animosity. 'I heard that you would be shooting here today and I was curious to see for myself what kind of shape that you were in.' Christine replied as her eyes went up and down my body. I hate to admit that I felt self-conscious as she sneeringly evaluated me. Christine looked good, really good. Obviously she had been training hard during the four or five years that had elapsed since I had last run into her. I, on the other hand, could not remember the most recent time I had seen the inside of a gym. Since mid-2008 I'd been spending my days inside a strip club and my nights inside an unending bottle of Stolichnaya. The expression on Christine's face revealed her delight at how much I had deteriorated. Slowly we approached each other and began circling in the center of the ring. Christine was talking a bunch of smack but I don't even remember what she was saying. Without warning I flew at her and landed a vicious kick to her midsection before she could even try to protect herself. 'You'll never be able to respect yourself again after an out-of-shape alcoholic kicks your ass!!!!' I screamed at her. The photos taken during our encounter show the intense, violent nature of our mutual hatred. We were moving so fast during our fight that much of it must have looked like a blur to the small assortment of shocked bystanders on the set that day. We went back and forth, trading the upper hand so many times that my head is still spinning when I think of it... "